When Anne first visited our clinic she was frustrated. She had been wearing a denture for many years and had been told elsewhere that it was her only option. When we saw her we listened to her concerns which were that her denture was unsightly, it was loose, and food was getting in underneath it. She wanted to know were there any other options. We initially CT scanned Anne and used implant simulation software which showed us that implants were an option at Bowe Dental for her.

Now 5 years down the line, Anne came in for her routine check up. The implants are functioning wonderfully and she is delighted. Anne said “This is the best thing I’ve ever done. I forget they’re not mine, they feel like they’ve always been there. Thank you to Dr. Bowe and his team at Bowe Dental Clinic.” 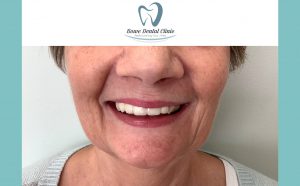 You can find out more about which cookies we are using or switch them off in settings.

This website uses cookies so that we can provide you with the best user experience possible. Cookie information is stored in your browser and performs functions such as recognising you when you return to our website and helping our team to understand which sections of the website you find most interesting and useful.

You can adjust all of your cookie settings by navigating the tabs on the left hand side.

Strictly Necessary Cookie should be enabled at all times so that we can save your preferences for cookie settings.

If you disable this cookie, we will not be able to save your preferences. This means that every time you visit this website you will need to enable or disable cookies again.

This website uses Google Analytics to collect anonymous information such as the number of visitors to the site, and the most popular pages.

This website also uses Facebook to collect anonymous information such as the number of visitors that visit pages by clicking a link on Bowe Dental Clinic's Facebook page.

Please enable Strictly Necessary Cookies first so that we can save your preferences!